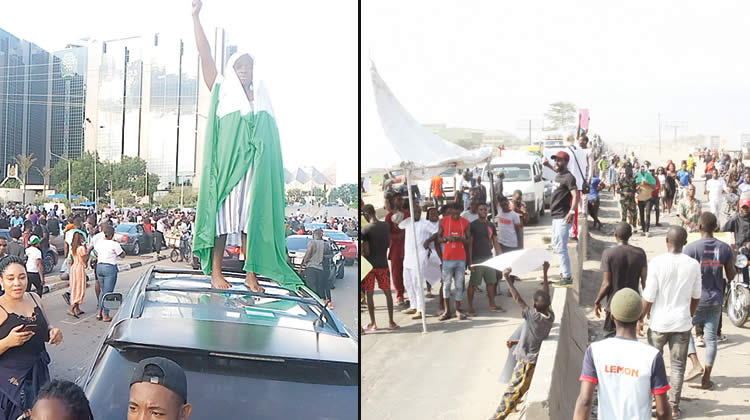 On Sunday, #EndSARS protesters, the Alliance for Survival of COVID-19 and Beyond, human rights groups and lawyers warned the Federal Government against deploying troops to stop the campaign for police reforms.
Read Also:
We won't support candidates unknowledgeable of North insecurity - ACF
The protesters have been holding rallies across the major cities of the country for the past 12 days demanding the disbandment of the Special Anti-Robbery Squad, among other requests. On Saturday, the Nigerian Army had said it would begin Operation Crocodile Smile VI in tackling cyber warfare and insurgency.
Read Also:
Olufon's killing: Afenifere Sultan, Alaafin, Olubadan faults insecurity
#EndSARS protesters and other groups interpreted the move by Buhari’s regime to deploy troops to stop the demonstrations against SARS. The groups also warned the President that such an action would backfire. The Army, in a statement titled, ‘Exercise crocodile smile VI has nothing to do with #EndSARS protests whatsoever’ said the operation was not targeted at the protesters. Few hours after the Army issued its statement, the Federal Government, through the Minister of Information and Culture, Alhaji Lai Mohammed, also said no government would fold its arms and allow anarchy. The Minister, in an interview with the Nigerian Television Authority, said, while the original conveners of the protests might have meant well, it was obvious that they were no longer in control of the initiative. The minister said a peaceful protest was an integral part of democracy, adding that that was why the Federal Government had treated the protesters in a very civilised manner. He stated, “But if you look at what happened to the governor of Osun State, it has gone completely beyond a peaceful protest against excesses and abuse of power by the police" “There is nowhere in the world where a government will fold its arms and allow the country to descend into anarchy" “We are no longer dealing with #EndSARS but a volatile situation that can lead to anarchy if the government does not take some very firm steps to protect the lives and livelihood of innocent Nigerians” The Minister also cautions protesters against breaching national security on Sunday. The Minister of Defence, Major General Bashir Magashi(retd.), gave the warning when the National Coordinator, Buhari Campaign Organisation, Danladi Pasali, led the executive members of the group on a courtesy visit to him at the Ministry of Defence, Abuja. In a statement titled, ‘Defence minister cautions protesters against undermining national security,’ issued by his Special Assistant on Media and Publicity, Mohammed Abdlkadir. It stated, “The Minister of Defence, Maj. Gen. Bashir Magashi (retd.), has cautioned #EndSARS protesters against breaching national security” However, the #EndSARS protesters said that the deployment of troops would not stop them from continuing with their daily rallies and demand for police reforms and also the soldiers will join the protests. They said any move to deploy military force would backfire. As reported, a leading member of the #EndSARS movement, Deji Adeyanju, speaking to The PUNCH on Sunday, said the Federal Government could not stop people from protesting. Adeyanju noted that the military had no constitutional authority to interfere with the rights of Nigerians to freedom of assembly and speech. He said, “In a democracy, the army has no locus to interfere with freedom of assembly, freedom of speech, freedom of the press. They have no single role to play. But if the President wants to truncate democracy by inviting the army, then, we will know he has suspended the constitution. You can’t stop the people from gathering in a democracy” Insisting that the government had not done anything on police reforms, and dismissed as false, claims that the police authorities had disbanded SARS, Adeyanju, who is the Convener, Concerned Nigerians, said, “Protests are not stopping even if they deploy the army. They would further ensure that more people come out for the protests" “The more force they use, the more people would join the protests. If the President deploys the troops, you would be surprised at the number of military officers that would join the protesters in solidarity. They are just going to worsen the situation”
Drop your Comment »
Source: https://punchng.com/endsars-crocodile-smile-military-operation-will-backfire-protesters-others-warn-buhari/

What a difficult truth, failed to be admitted

We really hope so cause we know of the rich rapists

Even the northern president does not care about their people, 2023 comes with a change

Hoping for the best

They are victimising the protesters and kept denying it, what a democratic government we are running

All politicians are ingrate

This is how they do when seeking for position

Such a passionate leader (sacarsm)

Another problem in Nigeria we need to face

#EndSARS: We will drag Buratai to ICC if soldiers kill protesters - Falana-led group

NairaPark provides effective advertisement at the cheapest rates possible. If you are a small business owner looking for how to increase your sales or brand, then advertise here. Learn more »

What a difficult truth, failed to be admitted

We really hope so cause we know of the rich rapists

Even the northern president does not care about their people, 2023 comes with a change

Hoping for the best

They are victimising the protesters and kept denying it, what a democratic government we are running

All politicians are ingrate

This is how they do when seeking for position

Such a passionate leader (sacarsm)

Another problem in Nigeria we need to face